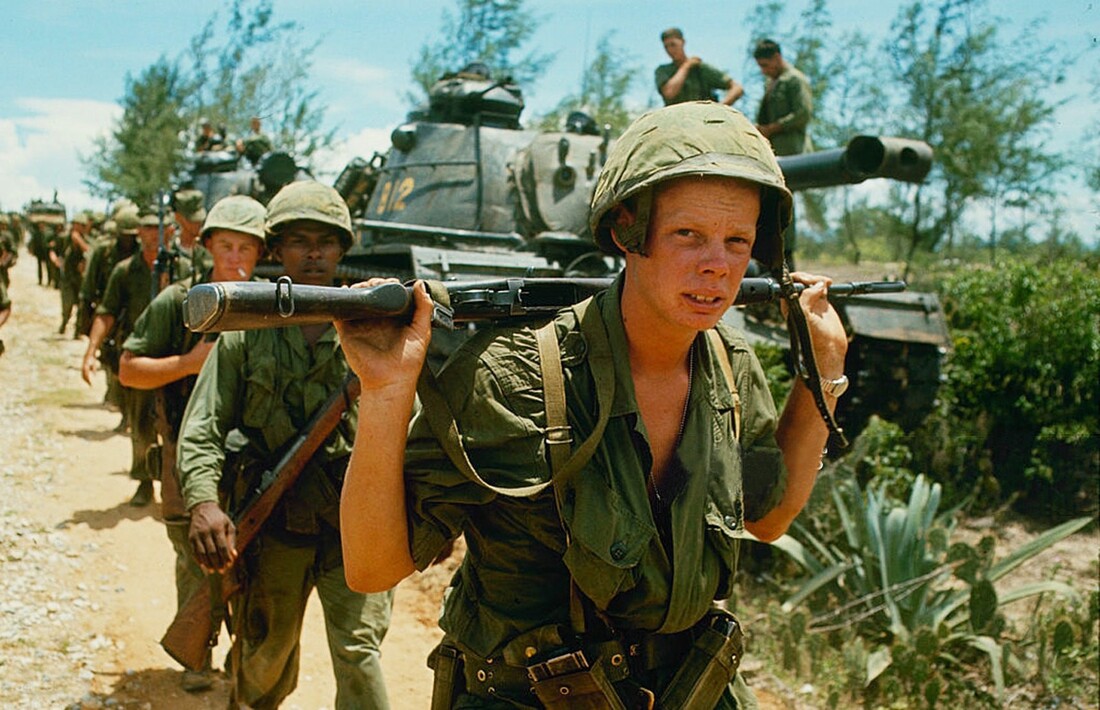 ​Uniforms on CoC-69:
CoC-69 The ride of the Valkyries is a LARP set to a historical time period rich on sources. Still, we don't intend to go full "360*"immersion, as we don't want to demand too much from the players when it comes to investment in costumes and equipment. Exactly how accurate the players wants to represent their characters, we leave to the individual player. We operate with a colour-system, where you should avoid red colour. Yellow colour is OK and green colour is awesome.
On the three pictures below, you see examples of green (left), yellow (centre) and red (right) costumes. Not much to comment on the green picture, all stuff either authentic or carefully re-created garnments and equipment. In the picture in the centre, one of the organizers poses with a typical yellow-colour-outfit (actually the watch is red red colour...) The jacket is a single-color ww2 us army jacket, the pants, hat and boots are Norwegian army model, easily obtainable in Norway and the rifle is a bolt-action soft-gun. The dude on the right picture looks cool, but is red, as he is packing too modern equipment. Notice camo-pattern and railings on his rifle + a modern days helmet with fittings for night vision, and tactical combat gloves/kneepads are no-no.
Here's a website  where you can see pictures of uniforms and accessories.
​Here is another website that is recomended to order from.
​We want singlecoloured (green) uniforms, no uniforms with camo-patterns, even if some american units had that in Vietnam.
​(Sewing an uniform is of course also totally Green.)
And here is a good website if you want to read up on what kind of gear, uniforms and equipment was used in Vietnam.

Headgear:
The M1 helmet (or proxies) is no must, as the platoon is going on a patrol-mission. Headband, fish-hat, field cap is just as fine.

Footwear:
We want black boots (green), but your personal comfort (and economy) comes first, so if you have some mountain shoes or army'ish looking boots in other colours, that is tolerated (yellow). Avoid plastic shoes/trainers with sharp, light colors (red).

Typical red colour gear:
Modern camo-uniformes, modern helmets, chestrig, platevests, etc. + trainers.
Weapons on CoC-69:
​Every soldier needs a personal weapon, and as with the uniforms, we operate with the traffic-light colour system:
​
​Replika weapons, softgun, paintball, or blankfire-versions of the following weapons are "Green":
M16a1
The standard infantry personal weapon from 1964 onwards. Everybody playing a rifleman can show up with this weapon.

M14:
Introduced in 1959 as the infantry's standard weapon. It's plausible that some prefere the old weapon, and can have this as their personal weapon.

CAR-15 (XM-177):
Introduced in 1965, this short-barrel-version of the M16 was used by special forces and "Commandos" in Vietnam. As this platoon is sent on special ops, this kind of rifle is becoming available. (Also, if  you have a weapon that can be modified to resemble a CAR-15, that is easier to do than converting a weapon "all the way" to become an M16a1).

Link to affordable M14:
Czech company:
Airsoft Megastore:
Airsoft Global
Blankfireversion:
Yellow colour weapons:
Rebuilding an assault-rifle replica that you allready have into a M16'ish weapon is doable. Yellow-colour versions can be made by buying front sets to more modern derivatives, like the Colt M4 or AR15. You can order a front set like shown in one of the pictures above. You can also search for "M16 airsoft handguard" in order to obtain the handle on the top of the weapon.

Other plausible weapons:​​
As this is a patrol operation in jungle with short ranges, other kinds of hand weapons are plausible. The following weapons are deemed plausible by the organizers. So if you have weapons looking like the following, and you don't feel like investing in an M16, that's OK:
Bolt-action rifles:
Precision-rifles were used by snipers on all sides. The reliable mechanism of a bolt-action rifle was also reassuring. If you plan to join the LARP with a bolt-action rifle, you're likely to be cast as a sniper or as an NPC/SiS (VietKong). So if you don't own a weapon and feel the appeal of the lower prices of a bolt-action airsoft, etc, we'd prefer if you rather went for one of the equally reasonabely priced alternatives below:
Pump-action shotguns:
The platoon has been ordered to bring pump-action shotguns, for unclear reasons. If you don't have any weapon and want to buy somthing in lower price-ranges than the M14/M16, the pump-action shotgun replicas/airsofts tend to be cheaper.
SMG's:
If you have any period-relevant SMG, you can bring it. The SMG is light and nimble, very practical in short ranged firefights. Especially if you have some secondary role in the squad, like medic, radioman, etc, the SMG is a very practical weapon. People in the recon-squad can also have SMG's, as well as team leaders and squad leaders. Plausible SMG's can be the M1 US-Carabine, the Thompson SMG, UZI, Stengun or the M3 "Grease gun".
AK-47 Kalashnikov:
It's the enemy's weapon. But it is plausible that some veteran have obtained an enemy's weapon, and that he for some reason or another wants to bring it to the field. Also, if you plan to sign up as Vietkong, having a Kalashnikov is PERFECT!
Other semi-plausible weapons:
Any period-relevant pistol or revolver is OK. Mostly officers, medics, or machine-gunners wield pistols.
-And if you'd happen to have any of theese, we'd appreciate it!
M 60 machinegun
M-79 grenadelauncher
​Claymore-mine replica.
Red colour weapons:
We don't want "modern looking" assault rifles. The easiest way to identify an assault-rifle as too modern is if it has an adjustable stock, an aimpoint sight and rails. Below, you see a typical "Red" weapon. It has an adjustable stock, a huge aimpoint sight, and rails on the front piece. 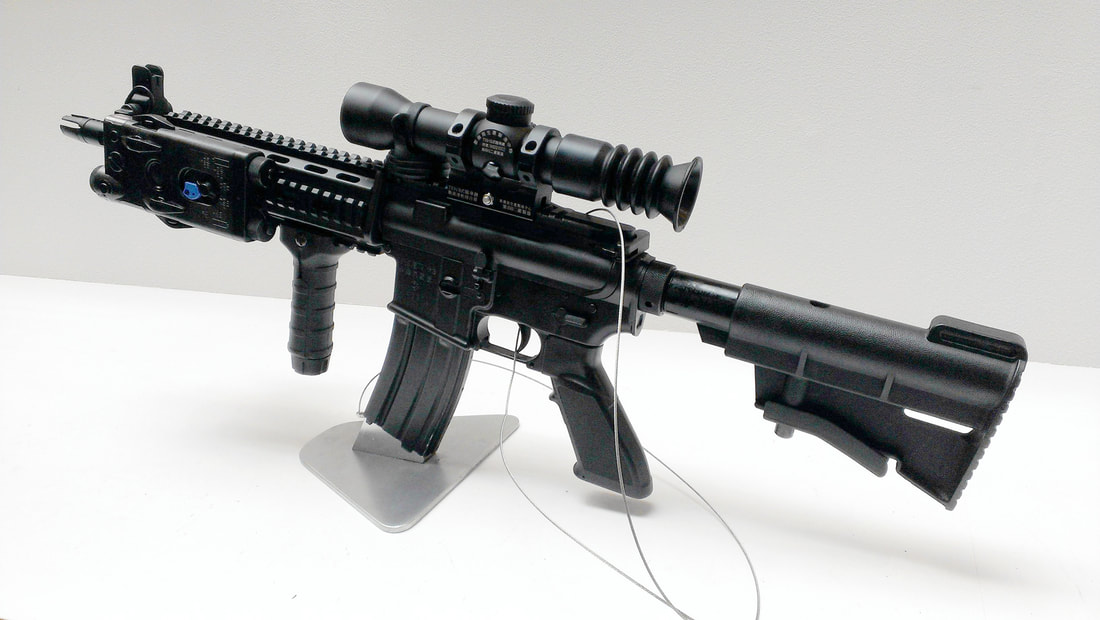